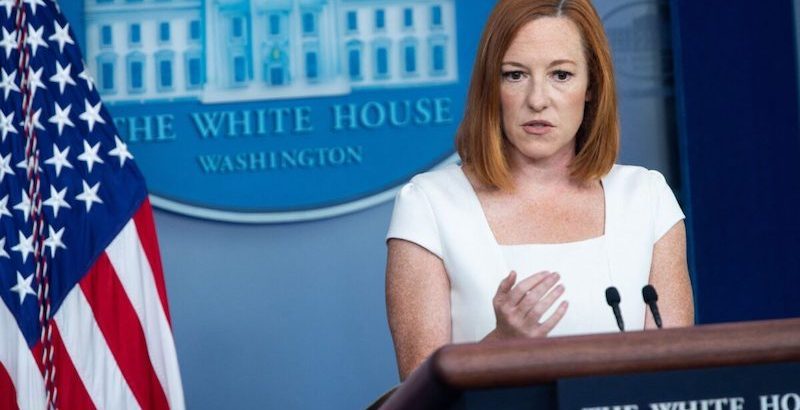 Federal Government Does Not Have Database of Who Has Received COVID-19 Vaccine: White House

The White House’s effort that involves people going door-to-door to try to boost COVID-19 vaccination rates does not rely on a database, the Biden administration’s press secretary said Thursday.

“The federal government does not have a database of who has been vaccinated. That is not our role,” press secretary Jen Psaki told reporters in Washington. “We don’t maintain a database along those lines. And we have no plans to.”

White House officials, as well as President Joe Biden, said Tuesday that a key focus in the coming weeks was knocking on doors to deliver information about COVID-19 vaccines to Americans.

“We need to go to community by community, neighborhood by neighborhood, and oftentimes, door to door—literally knocking on doors—to get help to the remaining people,” or those who have not received a vaccine, Biden said in remarks from the White House.

The plan triggered staunch pushback from Republicans, with Arizona Attorney General Mark Brnovich warning the administration against using medical records to ascertain which Americans have not gotten a jab.

Missouri Gov. Mike Parson added on Thursday that he informed the state’s health department “to let the federal government know that sending government employees or agents door-to-door to compel vaccination would NOT be an effective OR a welcome strategy in Missouri!”

Psaki told reporters in Washington that the effort will utilize data on where vaccination rates are lagging and that the messengers are not government employees.

“The best people to talk about vaccinations with those who have questions are local trusted messengers. Doctors, faith leaders, community leaders. As part of our efforts, trusted messengers may go door to door,” White House COVID-19 coordinator Jeffrey Zients said in a separate, virtual briefing.

The comments came on the same day a top administration official, Health Secretary Xavier Becerra, argued on television that the federal government has the right to know who has been vaccinated and who has not.

The door-to-door knocking actually started way back in April, White House officials are saying. A network called the Community Corps was launched then by the Department of Health and Human Services. The announcement did not detail volunteers going to door-to-door, but said the corps would be provided with public health information and resources so they could “help get friends, family, and followers vaccinated.”

A volunteer listing told prospective applicants that they would get “fact sheets on vaccine safety, tips on how to talk with friends and family about the importance of vaccination, and hints for planning and attending community events.”

A smattering of local news stories later detailed how some volunteers were knocking on doors to promote vaccination. U.S. Surgeon General Dr. Vivek Murthy told volunteers on a phone call last month that he’d heard from students who were knocking on doors, CNN reported. And the Biden administration said in a fact sheet in early June that the administration would mobilize people to make calls and texts to those in areas with low vaccination rates, as well as going door to door to try to get Americans to visit nearby clinics to get a jab.

Still, the remarks this week, especially Biden’s, set off a firestorm after appearing to some to be a new program.

“President Biden wants to send people to knock on your door to bully you into taking an ‘optional’ vaccine. Anyone who wants a vaccine is able to get one. Leave everyone else alone! Americans don’t need the federal government telling them how to live,” Rep. Jody Hice (R-Ga.) wrote on Twitter.

Approximately 47 percent of Americans are fully vaccinated, with another 7.5 percent getting at least one dose as of July 7, according to federal data. The two most widely used vaccines in the United States require two doses.

Experts differ on what percentage of the population needs protection to reach herd immunity, especially given the variants that keep emerging. Some point to a growing body of evidence showing those who have had COVID-19 and recovered enjoy a level of immunity similar to that provided by a vaccine.

Door knockers will merely present people with details on vaccines but will not try to compel them to get a shot, White House officials have said.

“I will say the thing that is a bit frustrating to us is that when people are critical of these tactics, it’s really a disservice to the country and to the doctors, faith leaders, community leaders, and others who are working to get people vaccinated,”  Psaki said. “This is about saving lives and ending this pandemic.”