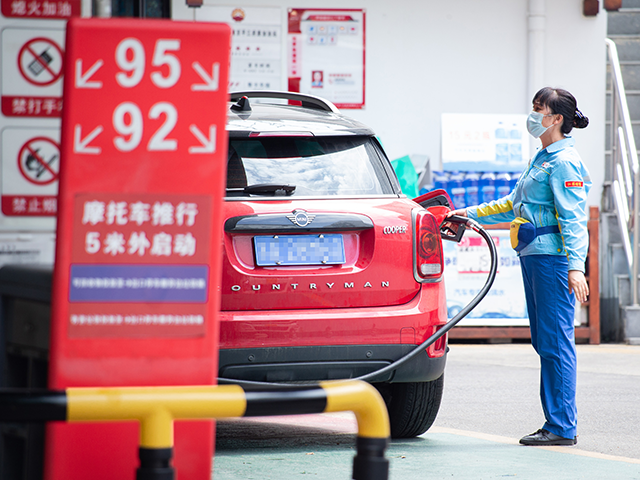 “The prices will go down by 130 yuan (about 19 U.S. dollars) per tonne and 125 yuan per tonne, respectively, according to the National Development and Reform Commission (NDRC),” Xinhua reported. The communist regime outlet noted that the price drop was the fifth of its kind this year and fourth since June. The government agency announcing the move, Xinhua detailed, acted in response to a drop in international oil prices – partially fueled by a collapse in demand in China, where the Communist Party regularly, and arbitrarily, imposes sweeping Chinese coronavirus lockdowns in major cities without warning.

Xinhua did not report what gasoline and diesel prices were prior to the announced drop on Tuesday or explain how the prices per tonne are reflected in per-liter prices at the gas pump.

The announcement of a price drop for Chinese travelers — who, under the social credit system, can only drive where the government allows them to based on their loyalty to the Communist Party — stands in contrast to ongoing outrage in the United States over gas prices staying at or around $4 a gallon nationwide. The Biden administration has simultaneously attempted to court praise for keeping gas prices under $5 a gallon while arguing that high gas prices may result in more electric vehicle purchases and a more rapid transition to a “green” economy.

“Under the current pricing mechanism, if international crude oil prices change by more than 50 yuan per tonne and remain at that level for 10 working days, the prices of refined oil products such as gasoline and diesel in China will be adjusted accordingly,” Xinhua explained.

In free societies, oil product pricing changes organically in response to supply in demand. In China, the Communist Party has total control over pricing and chooses to increase or drop prices at its will, typically following the trends in international free markets.

“The new tax investigations, expected to begin later in August per Reuters’ sources, could further put downward pressure on fuel output in China, where demand faltered at the start of the summer due to snap COVID-related lockdowns,” OilPrice.com predicted this week. “The new investigation could last for months and depress the business of independent refiners.”

China is the world’s largest importer of crude oil. Chinese companies participated in the purchase of American oil released from the Strategic Petroleum Reserve in July, Reuters reported at the time, detailing that the Biden administration had exported over five million barrels of oil to the other side of the world. Biden had announced the release of the reserve oil, meant to be used in cases of national security emergencies, as an attempt to lower gasoline prices at home. The amount of oil in the strategic reserve fell to its lowest level since 1986 in June, potentially creating a crisis for America in the event of an emergency.

“Fact-checking” websites attempted to dilute the outrage surrounding the Chinese purchases of emergency reserve oil following an outcry from Congressional Republicans and the general public, but did not deny the exports.

“About 1 million barrels of crude oil from the reserve are being made available each day for sale to the highest bidding company. Some of the companies have then chosen to export some of the oil to countries around the world, including China,” FactCheck.org confirmed.

The Poynter Institute quoted a gasoline price expert claiming that sales to China would lower gasoline prices in the United States by increasing the supply of global oil, though in a much more long-term way than simply entering the strategic reserve oil into the American market exclusively.

In addition to buying American oil, China has openly boasted of rapidly rising trade volume with Russia following European attempts to sanction Moscow over the eight-year-old war in Ukraine. The Global Times, a Chinese government newspaper, reported on Sunday that China documented a 30-percent trade increase in volume between Russia and China, much of it due to purchases of fossil fuels.

The report indicated that China purchased 247 billion yuan ($36.5 billion) in oil, mineral fuels, and asphalt products from Russia in the first half of 2022.