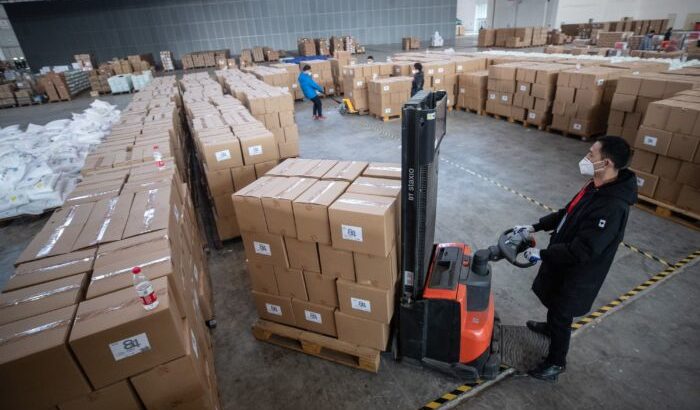 Staff members and volunteers are transferring medical supplies at a warehouse of an exhibition centre in Wuhan, China on Feb. 4, 2020. (STR/AFP via Getty Images)
INSIDE CHINA

As the pandemic has spread throughout the world, hospitals have become overwhelmed by CCP virus patients.

As many countries deal with escalating outbreaks, evidence has emerged that Chinese authorities have bought up billions of masks, as well as hundreds of tons of other critical medical supplies globally. Meanwhile, China, itself a major manufacturer of such medical supplies, has stopped exporting since January—just as the outbreak in China became severe.

Chinese firms and overseas Chinese organizations are the main means to realize Beijing’s global sourcing, buying up stock from the United States, Europe, Australia, and other countries.

In some instances, Chinese companies negotiated with major international manufacturers and asked them to sell or donate their stocks to China.

Having sold their inventories to China and unable to purchase new products from China, countries around the world are now running low on medical supplies.

Beijing authorities mobilized the Chinese diaspora to help buy up goods. “Keep on buying while sending back to China [medical supplies], and try your best to buy as much as possible,” read one article posted on the official website of the Chinese Communist Party (CCP)’s United Front Work Department, an agency dedicated to spreading the regime’s agenda inside and outside China. In the West, United Front organizations are usually Chinese student unions at colleges and universities, Chinese chambers of commerce, and Chinese associations.

The United Front encouraged all overseas Chinese to follow in the association’s footsteps to buy up all available medical materials and send them back to China.

The article explained that overseas Chinese in the United States, Canada, UK, Argentina, Australia, United Arab Emirates, and Seychelles have already bought up goods in the tons.

Some overseas Chinese organizations in those countries buy from local manufacturers and major wholesalers directly, such as DuPont. Others buy from whatever retailers they can find, according to the article.

The groups then hired Chinese and international shipping companies to transport the goods, such as FedEx and SF Express. The United Front also encouraged Chinese nationals to purchase goods and transport them in their personal luggage when they travel back to China.

On Feb. 27, the consulate general updated its request, saying that Chinese communities in the Los Angeles area had donated more than 60 tons of medical supplies since the epidemic ignited in China.

Chinese embassies and consulates in other countries made similar announcements.

China’s embassy in Japan, for example, announced on its website on Feb. 4: “At present, China urgently needs medical protective suits…medical masks (N95 and better), goggles, and other protective materials.” It asked Chinese nationals to purchase these goods and donate them to China.

China’s embassy in the UK announced that “on Jan. 31, the embassy received nearly 500,000 British pounds worth of donations.”

“Between Jan. 24 to Feb. 29, China’s customs authorities inspected 2.46 billion shipping containers of supplies for epidemic prevention, valued at 8.21 billion yuan ($1.158 billion),” China’s General Administration of Customs announced on March 7. “[Among them,] there are 2.02 billion facial masks and 25.38 million protective suits.”

State-run Beijing News reported on Feb. 10 that roughly 50 percent of the world’s supply of masks is manufactured in China. In 2019, China produced more than 5 billion masks, 54 percent of which were medical-grade masks.

If more than 2 billions medical masks were shipped to China during the first two months of the year, that means China imported about half of the world’s annual production of medical masks.

Many state-run businesses are directly involved in this effort.

“Sinopharm sourced from Europe, the Americas, and Asia. By Jan. 31, it ordered 2.78 million packages of medical supplies, which include 2.38 million masks, 166,000 protective suits, 15,200 goggles, and 190,000 pairs of protective gloves,” the report said. Furthermore, Sinopharm was preparing to buy up more.

Greenland Group, a Chinese real estate developer with the Shanghai government as a majority shareholder, also joined in.

Country Garden is a private real estate company headquartered in the city of Foshan, in China’s southern Guangdong province. It has businesses all over the world.

In three days, Country Garden’s Australian arm, called Risland, purchased goods and organized them to be transported on a cargo plane flying to China directly.

At the State Council’s—China’s cabinet—press conference on Feb. 3, the deputy minister of transportation and deputy minister of commerce both said that China’s e-commerce businesses, such as JD.com, Wumart, and SF Express, have sourced and donated masks, protective suits, goggles, and supplies via their “global supply chains.”

Some international manufacturers who have business in China also joined this initiative.

Medtronic is a medical device company headquartered in Minneapolis, Minnesota. It has manufacturing facilities in Shanghai, Beijing, Changzhou, and Chengdu.

In a Chinese-language statement, Medtronic said on its website that the company donated its manufactured ventilators, blood oxygen saturation meters, and ECMO equipment to Wuhan. It also bought protective materials from other countries and donated them to different Chinese cities. FedEx confirmed in a Chinese statement posted on its website that those machines and materials were shipped by them from the global market.

On March 9, during a daily press conference of China’s foreign affairs ministry, a reporter asked whether it’s true that the Chinese regime has banned all exports of medical masks and raw materials for making medical masks.

Geng Shuang, the ministry’s spokesman, answered: “China still needs a large amount of masks, and the supply cannot meet the demand. At the current phase, other countries will face difficulties when they try to purchase masks from China.”

But state-run media have reported that some businesses are “selling products meant for export inside China.”

As the company mostly produces for the export market, it needs to pay tariffs if it wants to sell its products in China. It would not need to pay tariffs when it sources materials from overseas.

But since Jan. 27, China’s customs authorities gave the company a special permit, allowing it to sell all its products inside China without paying tariffs.

Weihai News reported on Jan. 29 that other factories based in the same free trade zone have also begun following the same policy and stopped exporting their goods.

Jiangsu Net reported on Feb. 28 that 20 masks and protective suit manufacturers in Jiangsu province stopped exporting goods and only sold to China after the CCP virus outbreak.

Xinhua reported on Feb. 2 that the government of Hubei, the province where Wuhan is capital, issued a special permit that allows all medical masks meant for export to be sold within the province. Authorities ordered the products, which were printed with packaging in foreign languages, to be placed with Chinese labels so citizens could read them.

Caixin also reported on Feb. 1 that China’s Ministry of Industry and Information Technology was the government agency that supported the export ban, citing sources within the supply chain.

“In terms of the immediate issue, face masks, the N-95 face masks, China put export restrictions on those masks, and then nationalized an American factory that produces them there,” Navarro said, adding that China had effectively “prevent[ed] them [3M] from sending us any stuff.”

3M, a Minnesota-headquartered manufacturer, has factories in China. The facilities were unable to export products out of China in February, according to Navarro.

But recently, the Chinese regime switched gears, seeking to promote itself as a global leader in combating the pandemic.It has sent medical experts and much-needed supplies, such as masks and respirators, to European countries and the United States.

But the supplies were found to be defective.