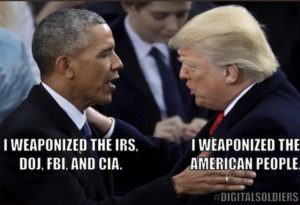 All of the Deep State, the puppets, know if they don’t take back the country, if they don’t get rid of Trump, they are going to jail for a long, long time. It’s all or nothing.

Trump and the Patriots have everything; how the DS spied on the President-elect, Senators, Judges and the American people; crimes against humanity, money laundering, etc.The mayhem in the streets is their cover-up.

The Swamp is deep and wide. In the Flynn case, a corrupt judge working with a corrupt prosecutor tried to put him away. It took another investigation to bring out the truth. Over the past 3 years, Trump has been replacing many of these corrupt judges. The people must get behind the leadership for it to be taken down.

Voice of America has a new voice. His name is Michael Pack. He is a Patriot and loves our country. Congress has been blocking Trump to get this individual because now the NEWS narrative is going to change. The person previously running VOA News was part of the Mainstream Media (MSM) swamp. Now, Voice of America is going to go against what the mainstream media reports. What happens if VOA counters the MSM? The viewers will finally notice the discrepancies. Could this be another step in taking down the corrupt Media?

The DS will be using the rioters for the 2nd wave of the pandemic. It is thought the media will say the rioters were in close proximation and will fan the narrative COVID has returned. However, once HCQ and other therapies are FDA approved, the narrative becomes moot.

When peaceful protesters march, the rioters hijack the event standing in the back, throwing bricks over the front line. When the media reports on it, it looks like the police are throwing tear gas at the protesters. This is what the media wants America to see. It’s all a lie. It’s all staged. Truly the media is the enemy of the people.

$55 Million in damages has been estimated in the city of Minneapolis, MN. Does this sound like a peaceful protest? Mayors who have set up the safe-zones, bail out Antifa, should be responsible to pay for damages. They are the ones responsible for NOT stopping this war on America. Why should the taxpayers pay for this mayhem.

James Mattis, former Secretary of Defense,  denounced President Trump and described him as a threat to the Constitution. He flipped the truth saying the President is trying to turn the American people against one another. The President has always called for Peace!  They organized 1 million people in to DC.  The mayor commanded the police to stand down, kicked out the National Guard and wants the FEDS out of there, too. Do they intend to storm the White House?

People see the true enemy. First they tell us we don’t need guns, that the police will protect us. Then, they tell us to get rid of the police because they don’t protect you, they hurt you. Then they tell us they are going to defund and disband the police. If police aren’t available to protect us, then it’s time we take up arms and carry guns to protect ourselves. If you are not armed, how do you protect yourself? Their narrative just fell apart. Armed citizens will defend their families and their property.

We are fighting for our freedom. Believe in POTUS; trust the plan. Above all, PRAY!  Where we go one, we go all.