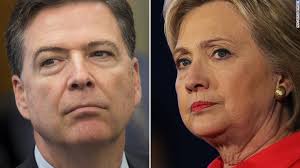 Has there ever been any doubt that James Comey’s FBI treated Hillary Clinton with kid gloves? We now have more evidence of the agency jumping to please her just before the presidential election…

The emails also show the FBI failed to document at least four interviews of witnesses in the Clinton email investigation.

We obtained the documents in our Freedom of Information Act (FOIA) lawsuit filed after the Justice Department failed to respond to a December 4, 2017, FOIA request (Judicial Watch v. U.S. Department of Justice (No. 1:18-cv-00154)) for:

I just spoke with David Kendall … I conveyed our view that in order to obtain the documents [FBI investigative material] they are seeking they need to submit a request pursuant to the Privacy Act and FOIA. I said they could submit a letter to me covering both statutes. They will send it in the morning. I said that we would process it expeditiously. David asked us to focus first on the Secretary’s 302 [FBI interview report]. I said OK. [Redacted] We will have to focus on this issue tomorrow and get the 302 out the door as soon as possible and then focus on the rest of the stuff.

In my view, we need to move as quickly as possible on this, but pursuant to David’s oral request last night, we should focus first on Secretary Clinton’s 302…. Is the end of this week out of the question for her 302?

In a follow-up email exchange, the same day, Anderson arranged for Herring, Page, former FBI Assistant Director and head of the Office of Congressional Affairs Gregory Brower, Strzok and others to “coordinate a plan for processing and releasing” Clinton’s 302, though one official reminds others that they should process the request “consistent” with other requests.

Then, in an August 21, 2016, email exchange Baker tells his people that he would “alert” Kendall shortly before Clinton’s 302 was to be posted on the FBI’s FOIA Vault webpage. On September 2, 2016, the FBI announced the release of Clinton’s interview documents.

Finally, on August 24, 2016, the acting FBI FOIA unit chief said he sees “no problem” with giving Hillary’s attorney a heads up before her records were posted to the Vault.

Other documents show that on August 5, 2016, Page, Strzok and FBI intelligence analyst Jonathan Moffa are notified by a FBI assistant general counsel from the national security law branch that additional 302’s were in need of processing:

Today [Redacted] brought over additional 302s from the WFO [Washington Field Office]. Are those supposed to go through the redaction process for production to DOJ on Monday? We’re trying to figure out what needs to be completed this weekend.

Page responds by writing to Strzok, Moffa and others that four FBI 302 report of interviews related to the Clinton “Midyear Exam” investigation had never even been written:

[Redacted] to the best of my knowledge, yes they will when Pete identified for [redacted] the DOJ edits that needed to be made to the 302s [redacted] discovered that there were four (I think) 302s that had never been written. What I don’t know is whose 302s they are but unless Pete or Jon are able to respond in short order, I would throw them on the pile for redactions. Thanks so much.

On August 24, 2016, Daily Beast reporter Shane Harris sent an inquiry to the FBI asking if Comey’s admission to Congress was accurate that Hillary’s lawyers at William & Connolly did not possess the security clearances needed to see and possess highly classified Hillary emails being stored at their law offices. Harris’s question set off a scramble at the top of the FBI all the way up to Comey over the next 28 hours, producing a seven-page (mostly redacted) email discussion, with Lisa Page concluding, “Could we say something more equivocal?”

In a September 1, 2016, email exchange, Page, Strzok, Office of Public Affairs official Michael Kortan and Special Agent Richard Quinn discuss an email from The Hill’s John Solomon, wherein Solomon forwarded them his draft article for Circa.com citing “government sources” detailing extensive evidence the FBI had collected, which showed Hillary Clinton “violated federal record-keeping laws” through her use of a private BlackBerry and server, despite the security and legal risks she was told they posed.  Solomon asked for any final “guidance” from the FBI before publishing. Page writes to Moffa, Strzok and a redacted FBI official, it was “pretty inaccurate,” but provided nothing to support her charge of its inaccuracy. Judicial Watch’s work on the Hillary Clinton email scandal is cited extensively in the column, and former U.S. Attorney Matt Whitaker was quoted as well, saying a special prosecutor was needed to look into Hillary’s use of the personal server.

On August 16, 2016, after Congress requested that the FBI supply additional copies of the binders of Clinton server-investigation materials, an unidentified FBI official complained to his colleagues of being understaffed and under supplied:

We literally do not have the office supplies to do this. Nor do I have the IAs [Investigative Assistants/Analysts] for assistance…. These binders are huge and each one took hours to compile.

I am not trying to throw shade…. I just wish decisions could get made by considering resources.

I need people in [room] 7947 ready to go in the early AM and a charge card for Staples.”

These incredible documents show that the leadership of the FBI rushed to give Hillary Clinton her FBI interview report shortly before the election. And the documents also show the FBI failed to timely document interviews in the Clinton email ‘matter’ – further confirming the whole investigation was a joke. AG Barr can’t reopen the Clinton email investigation soon enough.