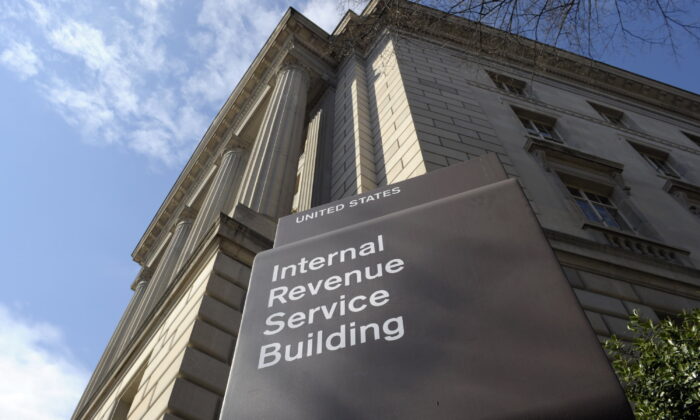 The measure, known as the “Inflation Reduction Act,” was approved in a 51–50 vote as Vice President Kamala Harris served as a tie-breaker for Democrats. A provision includes the hiring of 87,000 IRS agents, a move that was defended by Democrats, who said the funding would target people who cheat on their taxes.

“Millions of Americans aren’t going to be impacted by that other than getting better service from the IRS, having their telephone answered, [and] getting the questions they need in order to comply with our tax laws,” Sen. Ben Cardin (D-Md.) told Fox News on Aug. 7. “The auditing is going to be focused on those of high income, the large corporations, etc.”

Democrats have pointed to a May report from the Government Accountability Office showing that IRS audits have dropped over the past decade, including audits for the wealthy.

In a recent letter to Congress, IRS Commissioner Chuck Rettig said if an additional $80 billion is given to the agency via the legislation, it wouldn’t increase audits for households that earn less than $400,000 per year.

“These resources are absolutely not about increasing audit scrutiny on small businesses or middle-income Americans,” Retting wrote in the letter. “As we have been planning, our investment of these enforcement resources is designed around Treasury’s directive that audit rates will not rise relative to recent years for households making under $400,000.”

But Republicans say the IRS will target middle-class Americans with the tens of thousands of extra agents.

“Seriously, how out of touch do you have to be to brag about forcing a purely partisan bill through the Senate that raises taxes on the middle class, makes inflation worse, lowers after-tax income for Americans at every income level, decreases economic growth during a recession, and sends an army of IRS enforcers after grandma?” Republican National Committee spokesman Tommy Pigott asked, according to the Washington Examiner.

Sen. Ted Cruz (R-Texas) said those agents will “target Americans with 1.2 million new audits, more than half of which would be for people making less than $75,000 a year.”

“This bill is a give-away to the Democrats’ radical leftist base at the expense of middle-class Americans. It’s a betrayal of President Biden’s promise to not raise taxes on the middle class. Make no mistake—this bill will hurt America and hardworking Americans at a time when we can least afford it,” Cruz wrote.

Sen. Mike Crapo (R-Idaho), the ranking Republican member of the Senate Finance Committee, disputed Democrat claims that the new funding will be used to target tax cheats and millionaires.

“My colleagues claim this massive funding boost will allow the IRS to go after millionaires, billionaires and so-called rich ‘tax cheats,’ but the reality is a significant portion raised from their IRS funding bloat would come from taxpayers with income below $400,000,” he said in an Aug. 7 statement.

“This is just the latest example, again, of those who do nothing to protect tax welfare for the rich at the expense of everything else,” Jean-Pierre told reporters on Air Force One. “They’re blatant lies.”