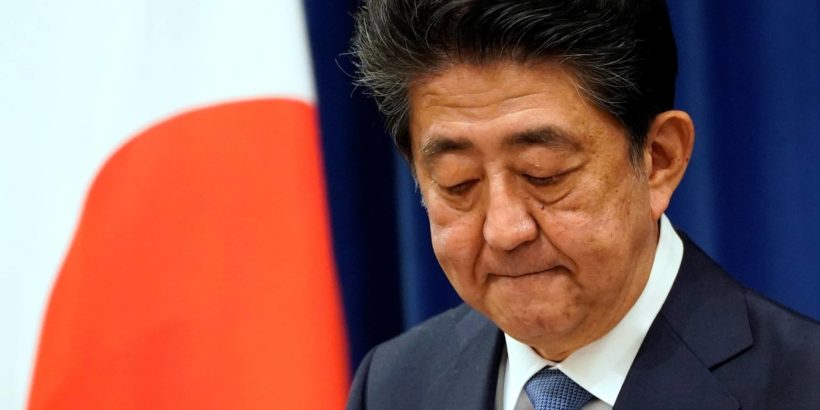 OSAKA/TOKYO – Ending weeks of speculation, Prime Minister Shinzo Abe announced Friday that he is stepping down for health reasons a second time, leaving Tokyo scrambling to make the transition to the post-Abe era.

Attention has now shifted to who will replace Abe and when. The nation’s political nerve center had recently been abuzz about whether Abe would resign over his chronic ulcerative colitis, a bowel disease.

Abe said he will stay on as prime minister until his successor is chosen. His Liberal Democratic Party is expected to hold a party presidential election by the end of September, with Diet lawmakers and three representatives from each of the 47 local chapters voting, but not rank-and-file party members.

With Abe’s conservative LDP and Komeito holding a strong majority in the more powerful Lower House, whoever becomes the next LDP president will almost certainly become prime minister.

Abe’s resignation will bring an end to his second tenure as prime minister, a period of political stability that lasted nearly eight years and saw him form a close personal relationship with U.S. President Donald Trump that few other world leaders enjoyed. But he also leaves behind unfinished business, and a controversial legacy, in East Asia.

Abe had just taken over the mantle as having the nation’s longest uninterrupted term as prime minister. But his health came under intense scrutiny after a checkup at Keio University Hospital in Tokyo on Aug. 17. He then returned for a follow-up exam on Monday, his 2,799th day in office during his current tenure and the day Abe said he made the decision to step aside. Counting his first tenure, he passed Taro Katsura to become the longest-serving prime minister last year.

During an evening news conference, Abe revealed that his chronic ulcerative colitis, which led to his resignation during his first term, was found to have relapsed at the beginning of August. He had been feeling ill since mid-July.

Even though he has begun to take new medication, constant treatment will be required, Abe said.

“With the illness and treatment, and with my strength not the best, I can’t allow myself to risk making incorrect political decisions, thus failing to produce results,” Abe said. “I intend to resign as prime minister.”

The prime minister, however, said he will continue his political career as a lawmaker, denying that he will retire from politics.

Abe spoke without teleprompters — which he usually uses during news conferences — saying he was working on his speech until the last minute.

At times, the tone of his voice sounded somewhat relaxed. But at one point, he paused for a few seconds to gather himself, appearing to tear up.

Reporters, lawmakers, Cabinet ministers and staff at the Prime Minister’s Office are all in close daily communication, but none of them seemed to know Abe’s resignation was coming.

When the first report of his intention to resign emerged shortly after 2 p.m., reporters at the Prime Minister’s Office rushed to a television screen set up in a corner booth by the entrance. Camera crews hurriedly set up their equipment, and journalists frantically made phone calls to sources to confirm the news.

“I learned about his resignation on a news report and I am surprised,” said Seiko Hashimoto, the minister in charge of the Olympics.

The developments followed reports that his health began declining in July and worsened early this month. That fueled fears in his party that he may not be able to carry on, instigating speculation on possible successors.

Abe’s first period as prime minister ended in 2007 after just a year due to the same bowel disease.

In the political center of Nagatacho, the race to find his replacement is accelerating.

“He has great capabilities,” Nikai said. “He has the ability to endure in the post.”

In a Kyodo survey over the weekend, 23.3 percent of respondents said Ishiba should be the next prime minister, with 11 percent saying Abe should stay on, 8.4 percent recommending Environment Minister Shinjiro Koizumi, 7.9 percent backing Defense Minister Taro Kono and 2.8 percent behind Kishida.

A champion of decentralization and regional revitalization, Ishiba enjoys a good measure of support in many party chapters, but he is struggling to generate enough support within the LDP’s Diet ranks.

“If I have the support of 20 people (necessary to run for party presidency), I will do what I need to do. I will decide in the not so distant future,” Ishiba said.

Suga, the top government spokesman whose relationship with Abe has reportedly cooled over the past year, is also a potential successor despite his denials of interest. Suga is close to Nikai, whose support may be key in determining Abe’s successor.

Kishida has long been considered a potential prime minister and enjoys a good deal of party support. But he isn’t so popular with the public or the LDP’s chapters and could face a tough time getting enough votes to win.

“I would like to do my best for the country and for the people,” Kishida told reporters on Friday.

Foreign Minister Toshimitsu Motegi said he will hold discussions with his faction members. Koizumi, the son of former Prime Minister Junichiro Koizumi, is believed to lack the necessary party support.

Asked at his news conference about future candidates, including Ishiba, Kishida, and Suga, Abe said that those whose names had been mentioned so far were all encouraging prospects. But he declined to endorse anyone. He added, however, that a clear vision for dealing with the coronavirus and teamwork will be important for whoever succeeds him.

Even though Abe cited health issues, what mattered to him was cementing his legacy as the longest serving prime minister in the nation’s history, said Mieko Nakabayashi, a political science professor at Waseda University in Tokyo.

“I think Japan is going to face very difficult challenges,” she said, citing coronavirus measures, the fragile economy and tense security relations with Japan’s neighbors. “There are no easy policies to tackle. So I wonder if Abe thought the time to step down is now.”

“The personal relationship between Abe and Trump couldn’t prevent tough negotiations over trade, or over Japan’s host nation support for U.S. troops later this year,” said Kotani, who is also a senior fellow at the Japan Institute of International Affairs.

The key to Abe’s ability to deal with Trump, he added, was the fact that Abe was able to remain in office a long time, unlike in the past, when prime ministers often resigned after only a few years, if not only a year, in office. This revolving door effect often frustrated U.S. administrations who were forced to constantly deal with new leaders.

“The biggest question is whether Abe’s successor can stay around a long time or not. That will be the most important element for the U.S.-Japan relationship and the alliance.”

Among potential successors, Ishiba and Kono are well-known by American policymakers who deal with Japan and the U.S.-Japan alliance, and Kono is a Georgetown graduate. Other candidates, Kotani said, are much less known to policymakers.

In East Asia, Abe leaves behind a controversial legacy, even within his own party. Kotani said Abe’s policies toward China and South Korea have been realistic, but are a source of anger among some LDP conservatives who wanted tougher measures.

“Chinese and South Koreans might expect that an Abe successor would provide a better chance at improving relations. However, I think Abe’s successor will not have that many options. They might even need tougher responses toward both countries because of the frustration among LDP conservatives with Abe’s approach.”

Tobias Harris, a senior vice president at Teneo, a Washington-based advisory firm and author of “The Iconoclast: Shinzo Abe and the New Japan,” said he expects the next prime minister’s biggest foreign policy challenge to be Japan’s relations with China and South Korea.

“The pressure is overwhelmingly in favor of a harder line towards China and there is little public pressure to fix the South Korea relationship,” Harris said.

In his news conference, Abe touched on his failure to realize a constitutional revision and a peace treaty with Russia. But he expressed particular sorrow over not being able to resolve the issue of Japanese nationals abducted by North Korea, mostly in the 1960s through the 1980s. Abe was an early supporter of the cause, at a time when many politicians in his own party ignored or downplayed the issue.

“I feel extreme pain about not being able to solve the North Korean abduction issue,” he said.