Panic Sets In; Deep State Realizes They Have No Protection 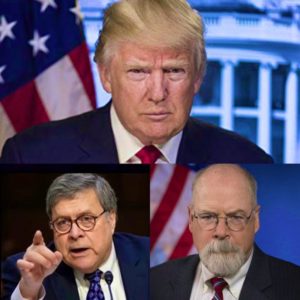 The Deep State has never before been out of control like they are today! They are using everything within their power to reclaim control but the more they try, the more they expose their agenda and lose followers to Trump.

Bill Barr, John Durham and others are prepared to go after the Deep States’ puppets for their crimes.  There is no rule in the DOJ that says the Attorney General cannot go after these people before the election because none are running for office.  Barr, very calmly but very clearly stated he has no intention in waiting to release his findings until after the election.  This sent the DS into a panic!

The FBI briefing of the Senate Intelligence Committee on the Steele Dossier was just declassified. In 2017, the FBI had been informed by the CIA and the sub-source that the Steele Report was not accurate. There was critical missing information, yet the FBI knowingly moved forward with the investigation. Who moved it forward and who signed off on the briefing?   Is this what Durham has been investigating?

The FBI/Crossfire Hurricane team deliberately gave a false report to the FISA Court, and also lied to the Senate.  They wanted to fan the flames of the entire Russia-collusion hoax in order to keep it alive. They appointed Mueller to investigate Trump for 18 months and spent millions of tax-payer’s dollars, knowing it was all a lie just to cover up their own crimes.  Lindsay Graham said that someone needs to go to jail for this!

Stefan Halper was making $500,000 for writing reports for the government. It’s important to note everything points back to Halper and SPYGATE, and Christopher Steele being at the heart of Russiagate. Why hasn’t the Senate not communicated with any of these people in 4 years?  Who is covering for these people?

The big buzz today has been with Chief Justice Roberts. Last month, he ruled in favor of DACA which states President Trump cannot override an Executive Order penned by President Obama. Trump did not think this was a wise decision. He affirmed that this gives him an incredible amount of power but we know the DS does just the opposite of what President Trump suggests.

We are in a National Emergency, he signed the Defense Protection Act, and now the Supreme Court gives him the power to establish any Executive Order he deems without the possibility of a reversal by anyone next in line.  No president can ever cancel his EO’s! Very soon, America will be returned to the people!

Think about the EO Trump just gave with a payroll tax holiday. If he doesn’t get re-elected, in this regard, it doesn’t matter because the next president cannot cancel this! Take note of all Trump’s EO’s extended to the people! Could this be the beginning of NESARA?

The same thing happened with North Korea and Iran. The DS was going to use N. Korea to start a war. The Central Banks were imploding so they needed a diversion, a cover story, which has been their method for decades; Central Banks in trouble, start a war so they can line their pockets.

They thought the US would lose this war, however rather than making an enemy, Trump made peace and reversed all of this! The DS/Mainstream Media told the world Trump would get us into a war with North Korea but he is the first president since Nixon who has not entered our country into a war in his first term? Think of all that fear-mongering the media did to their viewers!  They truly are the enemy of the people!

Certain governors, the media, those on the left, pharmacists, all were telling Americans if they took HCQ, it would kill them. If it was so dangerous, it would certainly not be in circulation for nearly 7 decades! Many governors are now fearing for their lives because  they blocked doctors from prescribing it. If taken in proper doses, it has been proven to save lives.

What is going to happen to the mainstream media for withholding information of lifesaving medication? What is going to happen to these social media companies who have banned the information from getting out? The largest class action lawsuit the world has ever seen is inevitable. The Patriots want the people to see the real agenda of the DS. Is it working?

Because of this, the Silent Majority is growing like wild-fire!

Q told us to ‘Watch the water?’ In Biloxi, Mississippi; Florida, and many other States, Patriots with American flags and Trump flags are boating by the thousands! They are marching in the ‘Walk Away, Democrats,’ Rally. They are standing up to ANTIFA until they cower in retreat. The Silent Majority is so powerful, it terrifies the DS. Patriots are emerging showing their support everywhere. If the Silent Majority all spoke out right now, it would be game over. But we will, on November 3, 2020!

What were things the DS wanted to keep hidden?

#1 Uranium One (people who took that money are desperate to keep it hidden.)
#2 Foreign Aid (Stolen money being kept flowing, kicked back to them in secret.)
#3 Weiner Laptop (Horrific images of children causing NYDP Offices who viewed it, to vomit)
#4 Iran Deal (Secret side deals and bribery, Obama spying on members of congress)

Something BIG is about to blow. Trump left the White House to insulate himself in Bedminster, NJ. The Op-ed raids in Cleveland and Miami just a few days ago sent a clear message to the domestic enemies of America. He, Bill Barr and Rudy Giuliani will not stop this until justice has been served. Arrests can be made before the election.

The Deep State and all their puppets know they are doomed! This mission is possible and is moving ahead. The Swamp is doing what they do best… they are suiciding themselves. Why interfere with the enemy while he destroys himself?

President Trump is showing the world that the U.S. Constitution is the law of our land; that no unelected official nor any world power, nor any other law will ever rule over it. It’s not suspended during a pandemic. It is the law, our law!

The Anons who follow Trump have faith and peace in his plan.  Crimes against humanity, Julian Assange, sedition, Spygate; all of this is coming together at the same time. Nothing is by coincidence. Nothing can stop what is coming.