Lindsay Graham said, ‘I’m going to give [James Comey] a chance to explain to the country about Crossfire Hurricane, one of the most corrupt investigations in the history of the FBI.”

Graham continued, “He signed a warrant against Carter Page in April of 2017. I find it hard to believe that the Director of the FBI did not know that in January and March of 2017, the Russian sub-source disavow the reliability of the Dossier which was critical to getting a warrant against Carter Page. You got a lot to say, James Comey. Come in under oath, and say it!”

What happens if James Comey declines? He’ll most likely be subpoenaed and he’ll have to testify under oath. But remember, they already have the declassified information and already know the answers. If Comey lies, he lies to Congress. If he tells the truth, then he ‘knowingly’ signed off on the FISA warrants. The cover-up will incriminate them. They are all in trouble and they know it!

China is the greater national security threat to the United States, economically, militarily, technologically.  This includes threats to election interference. John Ratcliffe believes China is concerned Trump will be reelected and will push anti-China policies.

With that, Trump won’t allow China to have the same economic deals anymore, and will place tariffs on them. The supply chains are breaking up and many people are being arrested with their connections to China.

Trump noted China has been spying on us. China, not Russia, has been influencing different corporations, different politicians here in the United States.

Hillary Clinton recently said, “Biden must not concede on election night.” What a dead give-a-way! She just announced to the whole world she thinks Trump is going to win the election! They are in sheer panic mode because why would Biden have to concede if he was going to win?

We are told the DS will attempt a cyber power attack the day after Election Day. They already know they have lost.

The media’s narrative is if Trump wins, it is not legitimate because somehow he will have stolen, rigged or cheated in the election. Again, they have already acknowledged Trump will win.

The United States Marshal says this, “U.S. Director Donald Washington and Georgia law enforcement officials will announce the results of Operation Not Forgotten, an operation resulting in the location, rescue or recovery of 39 children.”

From the beginning of his presidency, Trump has been on mission, rescuing children in Central and South America.  They are cracking down on drug smugglers and human traffickers. They rescued a woman in Honduras, which when we learn of her name, may rock the world.

With all the deaths occurring from COVID, investigations into all the governors have been taking place. The DOJ is requesting data from the FIVE Governors that issued C-19 orders that may have resulted in deaths of elderly nursing home residents.

Cuomo (NY), Wolf (PA), Whitmer (MI), Murphy (NJ), and Newsome (CA) have allowed COVID patients to enter nursing homes for care. Nearly half of all COVID nursing home deaths were in these states. This is being investigated by the DOJ as systemic murder!

If Joe Biden tests positive for HCQ in his system, this whole COVID narrative is over! If he refuses, Biden will look very suspicious, but either way, he is being backed into a corner. If Biden has nothing to hide, why not be tested?

The full autopsy has been released on George Floyd. Dr. Andrew Baker, the chief county medical examiner, who reviewed George Floyd’s blood test says the substances found in his body led him to conclude it was an overdose death. The police officer didn’t cause the death. The Fentanyl in his system was 4 times the level known to cause death. He also had speed and marijuana in his system.

When he said he couldn’t breathe, it was due to the drug overdose and not the act of kneeling on his neck.

Back in June, we already knew this truth, but the mainstream media pushed a racist narrative that was not true. The mainstream media caused division using the BLM movement to penetrate the minds of our youth into believing all cops are racist and they should be de-funded. The cop didn’t kill George Floyd, the drugs he took, did. Who is responsible for the death of George Floyd? George Floyd.

A BLM mob forced their way into a restaurant intimidating patrons into raising their fist which is a symbol of Nazism and Marxism. They accosted one customer when she refused to pledge her allegiance to them.

CNN, Nadler and others declared the rioting a myth. But now that the polls are suggesting more of America is in favor of Donald Trump for President, now Don Lemon is saying the riots have got to stop.

Shouldn’t they have stopped long ago? Should they ever have been allowed to start? President Trump boldly proclaimed to the mayors and governors he’s send in troops to stop the mayhem…all they had to do was ask. Did they?

Now, armed citizens are protecting their businesses, their cities, their homes, their neighborhoods. Trump put out a tweet declaring the THUGS are dishonoring the memory of George Floyd….and when the looting starts, the shooting starts.

Protest are protected under the law. Riots are not and people are being arrested for their crimes. America is waking up and the media is losing their narrative.

Twitter came out stating this tweet violated the rules about violence. Guess what happened? People are getting shot for looting. Armed citizens are taking measures to protect their property and are taking their country back. Twitter wants to shut us up! Isn’t that what happens when they censor social media?

The terror from these groups is nothing short of communism and they are on our streets and coming into our businesses and neighborhoods. They are not hiding it anymore but bullying Americans into submission. But America is waking up to their real agenda…Death to America.

Interestingly enough, the New Democratic National Convention logo begs the question, “What do they mean by D2America?” 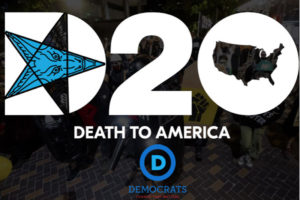 What is this symbolism? In the above logo, we see a tilted star but in the lower logo, we see the head of Baphomet, a goat head. This represents the Church of Satan. Note the symbol inside the ‘D’ it looks exactly the same.

Under this, (cue) gave us a Twitter link to Trump. It reads, “Two Democrat Caucus Meetings removed “UNDER GOD” from the Pledge of Allegiance. It sounded not only strange, but terrible. That’s where they’re coming from!”

One Political party embraces God, the other eliminates God. Symbolism will be their downfall. When was the last time a D party politician embraced true patriotism and love of country? Their hatred for our country is glaring. They allow riots and violence, they are not upholding the U.S. Constitution. When was the last time the D party called for unity across our nation?

Trump and the Patriots have brought the darkness of the D party into the light so everyone can see it. These people will be held accountable… law and order! Darkness to Light! God wins!