Is Biden Afraid To Debate Trump? Is This Why There Are New Debate Conditions? 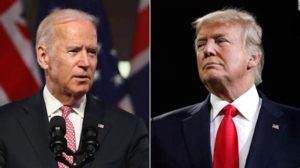 The Washington Post and the New York Times have both written conditions on how Biden should debate Trump in the Presidential Elections. Of course, they are not acceptable suggestions. Most likely, Biden will not go through with it and will be swapped out very shortly.

Gen. Flynn’s case is continually being locked but once it is dismissed, the Deep State’s entire empire will fall apart.

The Government dismissed Flynn’s case. Judge Sullivan decided to keep the case going after Obama leaked out a recording to get Flynn on Perjury charges, which was leaked on purpose. This went to the Appeals Court, and after listening to both sides, determined the case should be dismissed.

But, Judge Sullivan refused and asked the DS Circuit Court for a re-hearing on the dismissal. If this one case falls apart, it will show Mueller hid something and it will show Obama told Sullivan to lock it down. The roots of the DS are deep and wide.

Yesterday, the Supreme Court ruled on two major decisions regarding Trump’s financial records. First, they can obtain his financial records as part of a criminal investigation. Second, Congress cannot see them and the subpoenas will not be enforced right now.

By suing to get Trump’s financial records, under the same rule of law, they would then have to give up their own financial records, and that of their foundations. Can you imagine their own corruption that would be uncovered and by their own doing? Once again, the DS has been tricked and trapped. Trump, as always, is steps ahead.

Joe Biden tweeted out to Trump; “you want to talk about corruption?  I’ve released 21 years of my tax returns – release yours or shut up.” Don Jr. responded, “All your payoffs went to family members. Let’s see Hunter’s returns, I’ll show mine if he shows his.”

All these individuals knew when they ran, that their tax returns would be solicited so, many of them laundered money through foundations and family members. This hid corruption, however if their foundations are investigated and audited, it will reveal all.

Trump met with Mexico’s President and mentioned stopping drug and human trafficking on the Southern boarder. During this pandemic, Trump sent out people to stop these crimes against humanity. With the arrest of Ghislaine Maxwell, everything is coming together. Dots are being connected.

What is Operation Legend? AG Bill Barr and his team are cracking down on rioting in the cities. He stated that over 150 individuals have been charged and over 500 investigations are ongoing across the nation. They have been tracking, tracing and cleaning up these paid Army mercenaries hired by the DS. The White Hats have it all!

Trump pulled our country out from the WHO and of course Biden stated he’ll have our country rejoin the first day he is in office. Trump is dismantling their system and it terrifies the DS. Biden promises to  put it back but he won’t win.

We are the silent majority! We are more powerful than the DS will ever know. Their day is coming to a close and that day is Nov. 3, 2020!