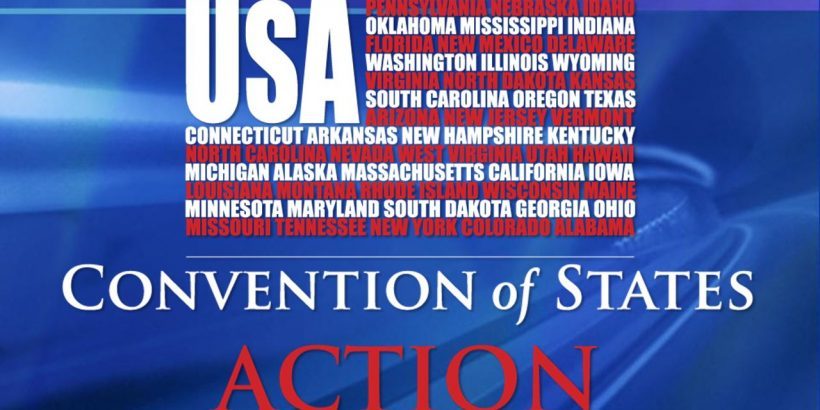 Political activist Mark Meckler, who heads the Convention of States Action project, warned that the Democrat-led election reform bill is a threat to democracy, while touting his initiative as a constitutionally-enshrined way to fight back and rein in federal overreach.

Meckler, in an interview with The Epoch Times’ “Crossroads” program, took aim at H.R. 1, or For the People Act of 2021, which passed the Democrat-controlled House on March 3 on a largely party-line vote of 220-210, with all Republicans and a lone Democrat—Rep. Bennie Thompson (D-Miss.)—voting against it.

Democrats have framed the bill as a crucial step against voter suppression and other alleged problems.

“Our democracy is in a state of deep disrepair,” said House Speaker Nancy Pelosi (D-Calif.) after reintroducing the bill in January. “During the 2020 election, Americans had to overcome rampant voter suppression, gerrymandering and a torrent of special interest dark money just to exercise their right to vote.”

President Joe Biden has strongly advocated for the bill, praising its passage and in a statement saying the legislation is urgently needed to protect the right to vote, as well as to “safeguard the integrity of our elections, and to repair and strengthen our democracy.”

Calling H.R. 1 “dangerous,” Meckler said it means to do away with voter ID laws, which he called one of the simplest protections “we can and should have in states against voter fraud.” Provisions that ostensibly seek to limit dark money in politics would force organizations like his to expose their donor lists, potentially chilling their activity.

“The intent is that the woke mob, the cancel culture, will go after any donors that support the convention of states,” Meckler said, adding that it would have a negative impact on the work of churches and charities. “So I think this is very dangerous,” he added.

An expert at the Heritage Foundation, a conservative think tank, told The Epoch Times in a recent interview that H.R. 1 would eviscerate ballot security measures and called the Democrats’ voter suppression argument “a ridiculous claim.”

“There’s no voter suppression going on. In fact, we have seen turnout in U.S. elections consistently go up in the last few elections that we’ve had, while the states have been doing things like putting in voter ID laws,” said Hans von Spakovsky, senior fellow and manager of the election law reform initiative at the Heritage Foundation.

“Frankly, I really can’t see any reason for these provisions, other than to make it easy to cheat and easy to manipulate election results,” he added, echoing remarks by other critics who have called the measure a power grab.

“It takes all the problems we saw in last year’s election and now cements them into federal law, and actually makes things worse,” von Spakovsky said.

Touting his project as a bulwark against federal overreach in the administration of federal elections and beyond, Meckler explained that the U.S. Constitution allows for states to muster a so-called convention—a body that could assemble and act independently of Congress to adopt constitutional amendments.

“The second clause of Article 5 says that the states—when two thirds of them request it—can gather in convention and propose amendments, and it was specifically inserted there to give the states power to push back against federal tyranny,” said Meckler, who identifies as a constitutional originalist who believes America’s foundational document should be interpreted as close as possible to the original text and intent of its authors, rather than modified in line with the prevailing social or political trends.

“The most important piece of this is that Congress is not involved, the president’s not involved,” Meckler said of the convention, adding that the measure would allow states to bypass Washington and “restore” the Constitution.

“What we’re looking to do is not change the Constitution, but restore the Constitution,” he said, arguing that, over the years, the courts have “dramatically” expanded the limited powers given to the federal government.

He said that, by law, it takes 34 states to call the convention and 38 to ratify any proposed constitutional amendments. His Convention of States Action project would be restricted to considering amendments that would limit the power and jurisdiction of the federal government, place term limits on federal officials, and impose fiscal restraints.

So far, 15 states have taken all the necessary legal steps to call the convention, which he said has been attempted over 400 times since the United States was founded, but never successfully.

“Today, there are 21 states in session considering this. I expect that we will pass somewhere between five and 10 states this year, taking us well past the halfway mark” of the 34 needed for the movement to get off the ground.