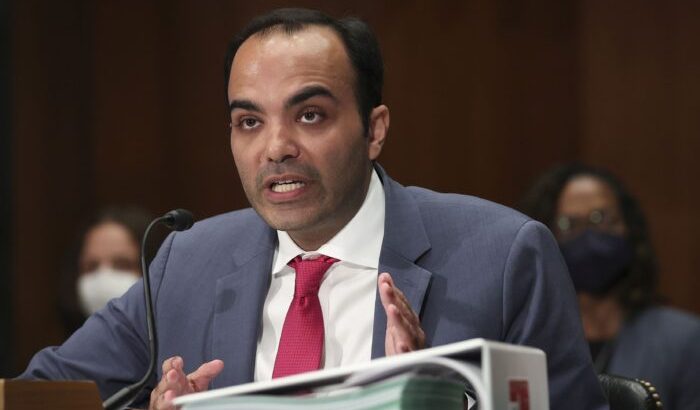 A top federal financial regulator said he was considering investigating PayPal for a policy that it has now rescinded that would fine users $2,500 for spreading “misinformation.”

Consumer Financial Protection Bureau Director Rohit Chopra told CNBC suggested that the policy, which PayPal said over the past weekend was issued in error, was too extreme.

“I’ve never actually never heard of a payment system thinking that it could fine someone for legal expression that their users are making,” Chopra told the outlet on Wednesday.

“We have ordered most of the major Big Tech firms and payment companies to provide us with information about how are they making decisions about who they kick off their platforms,” Chopra stated. “But we also need to look into whether they believe they can be fining users for legal activity.”

Chopra said the Consumer Financial Protection Bureau would have to investigate the matter and would not act yet. However, he noted it might be “new territory” for the agency to investigate.

On Sunday, the San Jose, California-based payment services firm said that an acceptable use policy “recently went out in error that included incorrect information.”

“PayPal is not fining people for misinformation and this language was never intended to be inserted in our policy,” the company told news outlets. “Our teams are working to correct our policy pages. We’re sorry for the confusion this has caused.”

The company did not elaborate on why or how it was mistakenly published. A request for comment from The Epoch Times was not returned.

According to several media reports last week, PayPal published a policy update prohibiting customers from using its services for activities identified by it as “sending, posting, or publication of any messages, content, or materials” promoting “misinformation.”

The new policy, which said customers could have to pay damages of $2,500 for each violation, was supposed to go into effect on Nov. 3, the reports said. A page that contained the controversial PayPal terms of service that included the fine was apparently taken down by the firm, but an archived version of it remains online.

“You are independently responsible for complying with all applicable laws in all of your actions related to your use of PayPal’s services, regardless of the purpose of the use,” it stated. “In addition, you must adhere to the terms of this Acceptable Use Policy. Violation of this Acceptable Use Policy constitutes a violation of the PayPal User Agreement and may subject you to damages, including liquidated damages of $2,500.00 U.S. dollars per violation, which may be debited directly from your PayPal account(s).”

After reports spread about the rule, former PayPal executives, including David Marcus and Elon Musk, sharply criticized the firm.

“A private company now gets to decide to take your money if you say something they disagree with. Insanity,” Marcus wrote on Twitter. Elon Musk, the billionaire Tesla chief who co-founded PayPal, wrote “Agreed,” replying to Marcus’s tweet.

Even though PayPal backtracked, the damage was already done. Shares for the firm plunged 6 percent on Monday, and the term, “delete PayPal” trended across Twitter.