The Unmaskers Are Unmasked, Justice Is Coming 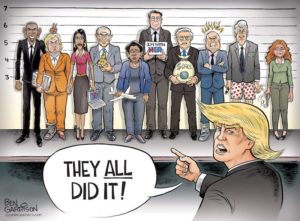 Declassification of those who unmasked General Flynn, have been unmasked. This has set in motion sheer terror as these traitors realize their demise.

Judge Sullivan seems to be trying to rile the people up against General Flynn’s case and wants to shut down his release. Why? Judge Sullivan holds a position in the FISA Court. James Boasberg and Rosemary Collyer both signed the FISA warrant.

A third judge, Judge Contreras, Flynn’s first Judge, was recused from the proceedings. He had personal relations wth Strzok and also was the FBI agent who set up Flynn. Most likely, Contreras signed the FISA warrant, as well. The Swamp runs deep! The prosecutors have all been removed and the traitors are exposed.

Many states are still in lock-down. Washington State’s Governor Jay Inslee has decided if there are no additional cases of Covid-19 within a 3 week period, the state can open up. Since most everyone has trace-Covid strains of bacteria, this will be an impossible achievment. Inslee has connections to the Bill and Melinda Gates Foundation which pushes a Covid-vaccine. Could this be why the the lockdown continues?

Why is Dr. Birx back-tracking by saying Covid numbers are possibly inflated by 25%. That is a lot!  Why are they inflated at ALL? Birxs’ numbers are being challenged and it looks like she is losing respect.

Dr. Fauci said, “The overwhelming majority of people recover from this virus.” If most of the people recover and become immune, then why is the whole country quarantined? Just what is the agenda, here?

Hydroxychloroquine is the number one drug currently being sold in France. Those who take HCQ get cured. Why then do we need a vaccine? Why are Drs. Birx and Fauci pushing back so deliberately?

A doctor in Texas has seen amazing results with her patients. The pharmacy is telling her to give up patient information and what is she is prescribing HCQ for. Knowing about HIPAA laws, she refuses to give information. We understand the DS is working overtime trying to shut HCQ down.

Ric Grenell has declass’ed it all. The Obama administrations is on display. No matter how he spins it, spying on an opponent is never routine, but illegal.  Eventually, they will stand before Congress fumbling through their lies of why they spied not only on Trump, but Cruz and others.

Obamagate continues to trend on Twitter and Facebook. Obama lead the charge and the Patriots have the docs to prove everything. Of course the media won’t touch it, but the docs are being revealed.

President Trump, during a Q & A with the media was asked about Obamagate. This was his reply. “Obamagate, it’s been going on a for a long time. It’s been going on from before I even got elected.  It’s a disgrace that it happened and if you look at what’s gone on and if you look at now all of this information that’s being released, and from what I understand it’s only the beginning. Some terrible things have happened and it should never be allowed to happen in our country again. You’ll be seeing what’s going on over the next over the coming weeks and I wish you’d write honestly about it but unfortunately, you choose not to do so.”

Obama was trying to continue to shape the country in what he and the DS wanted. Remember, he was the Shadow President, working with a Shadow Government. Get your popcorn ready and get your memes ready for battle. Q will sound the call!