Connections Between Recent Earthquakes and Underground Tunnels, Cause Curiosity (Part 3)

IN 1920, THE PROHIBITION WAS ENACTED. The selling, making and consumption of alcohol was outlawed. For 13 long years, from rich to the poor, business owner to customer, government to citizen,  no one was allowed to consume alcohol. However, the partaking of wine during Sunday morning’s Communion was the only exception… or was it?

Businesses on street levels became the perfect fronts for the corrupt. Drinking dens, saloons, speakeasies and other questionable schemes beneath the streets of Los Angeles were spearheaded by power-hungry and shady city leaders, officials and elites.  Tunnels were burrowed from basement to basement, linking much of the city to a hub of corruption.   Night after night, the LA tunnels came alive and were the perfect secret hideouts.Those who had the power to stop the hypocrisy chose instead to merge into the crowds below.

Today, tunnels in L.A. still remain but some are now lost {<video, click here} to history. Others are merely hidden beneath the surface.

On the other side of the country, New York City also admits rumors of secret tunnels and hidden networks beneath our feet. In 1933, one such tunnel was exclusively built for former President Franklin Delano Roosevelt  {<video, click here} but is no longer in service today.

Americans of the 1920’s adapted to the new laws of The Prohibition by soothing their souls with music. One new genre of music which sprang forth became known as Jazz music. The Jazz Age {<video, click here} as it was later called, gained nationwide popularity through the ’30’s and beyond.  The United States, home of jazz music, soon became loved around the world.

The 1978 map below, identifies networks of secret tunnels throughout the United States.  The dotted lines indicate tunnels running from Mexico to Canada, and Los Angeles, CA to New York, NY. It is no secret that in America, underground tunnels have been largely used to smuggle illegal drugs, illegal aliens and commit crimes against humanity. 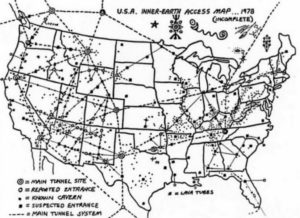 Exposing crimes against humanity in the underground is essential, as we continue ‘Unearthing the Underground.’  (Click here for Part 4)

JoLynn Live is a Singer; a wife of 36 years; Home-school mom to 10; Grandma to 11; Chicken Farmer; Patriot; C-Vine contributor.