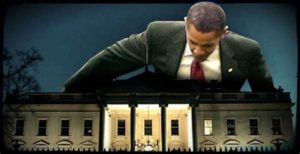 Trump discovered someone has been shadowing his visits with foreign leaders. It appears someone would visit with the same leaders either before or after Trump paid a visit. The shadow was former President Obama who has been caught a number of times paying a visit to these leaders. He wanted to be sure everything he had put in place during his administration, would still be in place after Trump got out of office.

How did shadowing Trump work out for Obama? Not so well. Trump terminated the deal with Iran, made a new deal with India and also China, just to name a few. Obama is not happy. Now, Trump and the Patriots are working on dismantling Obama’s shadow presidency and his shadow government. Could this be one reason why the DS is so set on booting Trump from office? You bet!

While the country was in lockdown rife with Coronavirus concerns, Governor Cuomo sneakily passed the 2020 budget that contained an amendment which makes it a felony for law enforcement to share DMV information with the Department of Homeland Security or Immigration and Customs Enforcement. The Greenlight Law has essentially criminalized police work. The DS used Cuomo to set up this act of defiance against Trump for securing the borders. They want this information locked up so illegals can continue voting, and to vote blue.

President Trump came out encouraging the Governors to open up all the churches. He believes worship is essential and the US citizens have the right to worship. It is our 1st Amendment right which in part makes it illegal to stop people from practicing their religion. Just because we have a pandemic, it does not nullify our 1st Amendment rights.

Again, one step ahead of them, Trump is exposing all those mayors and governors who refuse to submit to the US Constitution. Take for instance, Chicago’s mayor, Lori Lightfoot. She thinks she is above the law, has set herself above God, and told residents that no one is allowed to worship. She added that no power will override her lockdown on churches and businesses and had the Chicago Police fine 3 churches for meeting on Sunday. Will the DOJ get involved? Most definitely!

Trump has been taking HCQ. His results are great and has proven HCQ is safe to take. The World Health Organization was allowing clinical trials on the safety of HCQ and Chloroquine. All of a sudden, the W.H.O. halted this testing stating safety concerns. Why? They don’t want people to know it works.

This is not about a virus but about the election. They want to push a 2nd wave pandemic in the fall and if people are still fearful of contracting Covid-19, they will be more apt to vote-by-mail. Vote-by-mail has serious fraudulent benefits and the DS knows this. Most likely, Trump’s testing was done so we can have HCQ FDA approved for Covid-19. Right now, HCQ is FDA approved but not for Covid-19.

What came from the D-party? According to Prager U, here are a few worth noting: The Dem’s were against freeing the slaves and defended slave owners; they were responsible for starting the Civil War; they opposed reconstruction, they were anti-civil rights, etc. Since facts cannot be changed, and if someone wanted to hide them, most likely history books would be ‘burned,’ and another narrative would be written. Are we seeing this in real time in the mainstream media and censorship in social media?

Everything the DS is doing, is not working. This lockdown is exposing the tyranny of our mayors and governors. We are leaving our homes without fear, which means the Deep State has lost. Let’s keep standing for our rights, Patriots!  We are winning!