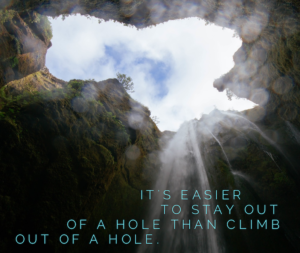 They thought President Trump would not be smart enough to call their bluff. They were wrong and now they have dug themselves a deep hole and are in it, scrambling to get out. They thought they were in control of the Silent Majority and were hoping the Silent Majority would engage in the riots with their assault rifles. That was the plan of the Deep State, but the effect was just the opposite.

The Silent Majority stood back and wondered what games these ‘children’ were playing. Surely the governors and mayors would put a stop to such nonsense. Why haven’t they?

Their goal was to see a Civil War begin, but the Silent Majority didn’t play their hand and now they are figuring the best way to climb out of their hole.

The coronavirus statistics that the CDC quietly reversed, stated only 6% died from COVID, a far cry from the original narrative of 94%. With only 6%, there is no reason to wear a mask! There’s no reason to have these lock-downs. We knew from the beginning what the Deep State was telling us, was fake. With this new percentage, when the public finds out, the Dems/DS/Media will lose everything!

They don’t even realize what demise they have placed themselves in. The majority continues to watch, continues to remain silent but soon, our voices will be heard, loud and clear, on Nov. 3rd, 2020. The DS really messed up!

An appeals court panel rejected an effort by House Democrats to have the court enforce a subpoena for testimony from former White House council, Don McGahn, which means they have nothing! They are still after Trump’s tax records but knowing Trump, he’ll be using this scenario to America’s advantage. All the DS has left is to keep Flynn quiet so they can create more chaos during the election.

Obama sent the message to Judge Sullivan to delay the release of Gen. Flynn, no matter what!  Why? Judge Sullivan is being blackmailed so in order to protect himself, he must obey. Now, it seems the case is going back to Judge Sullivan. They put Flynn through a terrible ordeal and want him silenced. All this was done to save themselves. How long will he be silenced. Time will tell!

President Trump is making peace deals around the world most likely with many more to come! Jared Kushner has taken a flight from The United Emirates to Israel. We are seeing peace around the Middle East. The endless wars are ending and Trump is bringing Troops home!

The DS still wants to keep the narrative moving forward. They still want to dangle the idea of foreign wars over America’s head. This is why Trump must move slowly in removing our troops.

Yesterday, President Trump re-tweeted the tweet which stated the CDC quietly updated the COVID numbers to admit that 6% of all 153, 504 deaths actually died from COVID. That is only 9, 210 deaths. Everyone else who passed had underlying issues and the others were quite aged.

Frankly speaking, we don’t needs masks. There are no clinical trials supporting mask–efficiency. However, there is proof from the Association of American Physicians and Surgeons (which you can find at X22Report.com website) which mask studies have been done.

The masks are made of everything under the sun! Bandanas, surgical masks and masks made from who knows what articles of under-clothing that we’ve all seen the videos of. Where is the clinical testing of these fabrics proving the weave of these fabrics keeps the virus out? How large is a virus, anyway?

A virus is tiny unlike a bacteria. Here’s the math of it: less than .3 in microns proves that these home-made masks do not work. If they did, we’d just put on a mask during every flu season. With the mask mandate in certain states, and if masks really work, why didn’t the COVID outbreaks stop immediately? During surgery, surgeons wear masks only so they don’t inadvertently donate spittle in the patient. That’s it!

Since Trump retweeted this, CNN, The Hill etc., spun the narrative saying Trump tweets out conspiracy theories. Didn’t the media emphatically say we must obey and follow the CDC?

Now that the truth has come out, and the CDC is showing different results, the media is now calling what the CDC has produced, a conspiracy theory. Why would the media accuse the CDC of this? Are they flip-flopping too? Now the media/the DS are all exposed!

Now, Schumer is falsely stating Trump is inciting violence. Is violence being incited when you stand up to a bully who is hunting you down, who wants to hurt or kill you? Apparently, self-defense is Schumer’s definition of someone inciting violence.

Biden emerged from his basement, gave a speech and left before answering any questions. He and Schumer are blaming Trump for the riots… but we thought these were peaceful protests and there were no riots? How could this be Trump’s fault?

With the population seeing the riots, now the DS/MSM had to acknowledge it. All along the way, President Trump has been offering his help and all a long the way, most of these governors or mayors have declined. For 3 months these elected officials have allowed the poorly run cities to all but burn to the ground. 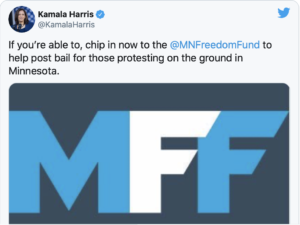 Kamala Harris made a plea for people to give their hard-earned money to help bail out those who were arrested for rioting. The fund was called  the Minnesota Freedom Fund.

Remember, peaceful protesters are protected under the U.S. Constitution and don’t get arrested for such, but people who loot, vandalize and hurt people, do. So why did Kamala put this out?  Why would we want criminals out on the streets again?

The Democrat’s Vice Presidential Candidate was a peddler for bail fund money that is sought to free violent criminals who were rioting on the streets of Minneapolis. She asked for $5 million plus.

Among those bailed out was a person who shot at police, a woman accused of 2nd degree murder for stabbing her friend to death to which this fund paid $100,000 cash, for her release, a sex offender convicted on two counts of rape currently being charged with kidnapping, assault and sexual assault in two separate cases. MMF paid 350,000 in cash for his release.

Another is a woman, who shot at a SWAT team in May, was charged with attempted murder. Police recovered a pistol which looked like a n AK-47 and the money Kamala Harris collected for the MMF, paid $75,000 in cash to get her out of jail.

The ‘peaceful protester’ who killed the Trump supporter in Portland calls himself, 100% ANTIFA and is being investigated for the death of Aaron Danielson. The ANTIFA crowd is a paid domestic force for the Deep State players.

Four men were sentenced for throwing home-made bombs made with chlorine, at a police officer after they staged a road block to lure them to their location. In Syria, the Islamic State was using chlorine bombs. The Deep State was funding ISIS. Can these home-made chlorine bombs be connected to the chlorine bombs used in Syria? They were both trained using the same tactics.

People have been watching the riots for quite some time now and see clearly of the corruption, the destruction, murders. These rioters are setting up guillotines and are lighting American Flags on fire. Their movement is all about destruction and chaos.

President Trump is heading to Kenosha, Wisconsin. The folks there don’t want Biden to show up. Biden thinks with Trump visiting, it will backfire on Trump, but really, if Biden shows up, it will backfire on Biden. The left is so out of touch, they have no clue how the people perceive him, anymore. They have lost control and the polls are showing this.

A list of Kenosha crimes has been made public. Most of the people have been bussed in from other areas to create chaos and destroy their town. The residents are not the ones who burned their businesses down, it came from those bussed in.

Kerri Kopek from the DOJ has the latest on federal arrests and charges related to rioting and civil unrest:

The MSM/Biden/Harris, are all saying the riots are Trump’s fault. If this is true, why don’t the Governors and Mayors let them send in the National Guard to shut them down? If it’s Trumps fault, why are they resisting aid? If it’s Trump’s fault, why did Portand’s Mayor Ted Wheeler, decline troop aid to stop the violence?

The whole thing backfired against the Deep State/MSM. The MSM is complicit in all of this, they have been reporting on all this and spinning the truth into a web of lies. all these months they were telling us it was not real and now they look like fools.

This was part of the plan to discredit the media and it’s working beautifully.

Pompeo, Trump and Pence posed in front of a photo of James Monroe and it appears he sent a message to everyone.  When Monroe and VP Tomkins ran for office, they faced no organized opposition from other Democratic Republicans in their quest for a second term.

Monroe won every state and received all but one of the electoral votes. Could it be that this message was given to us letting us know Trump will have no opposition, whatsoever, that he’s going to win every state and he will be president. If he wins every state, most likely the House and the Senate will be next. A lot can be achieved in a House and Senate without socialist Dems or Rinos.

President Trump tweeted out once again, “Law and Order.” The timestamp is 941. So, moving to post 941 it shows photos of Nazi Germany with the Auschwitz flag mirroring the flag of ANTIFA. Then it says, “These people are stupid. Maxine Stupid. (cue), letting us know the DS is falling right into Trump’s trap. Panic in D.C.

General Flynn has sacrificed so much for our country. A while back he said this:

“To breath the fresh air of liberty, we must not fear to speak the words of freedom. Freedom comes from within. It is not something handed to us. We must be willing to sacrifice for it.“

Flynn has been sacrificing himself, his family and everything for his love of country and love of us. Remember, in spite of what we see in the streets and on the news, when all this chaos is cleared, keep your eye on the prize, which is our freedom, for the best is yet to come!