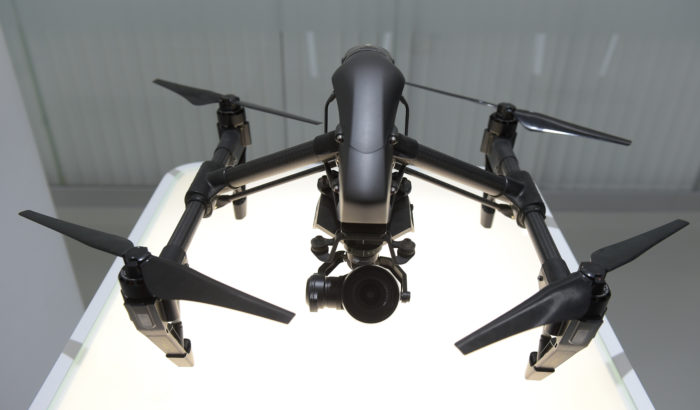 SPYWARE:  Remember the Chinese spyware planted inside our children’s toys?

The Communist Chinese Party is savvy/evil, and we cannot afford to be naive to their devices – literally!

In this picture taken on May 11, 2017, a drone is seen in the showroom of the DJI headquarters in Shenzhen. (Nicolas Asfouri/AFP via Getty Images)
.

The world’s largest consumer drone manufacturer, DJI, sent 100 of its drones to police, fire, and public safety organizations in 22 states, ostensibly to help in the battle against the spread of the CCP virus, commonly known as the novel coronavirus.

The move may be just one more act of goodwill amid an outpouring of support from the U.S. private sector, but DJI is a Chinese company that has already been flagged for making devices suspected of sending critical infrastructure and law enforcement data to the communist regime.

The Army, the Immigration and Customs Enforcement agency, the Department of Homeland Security, and the Department of Interior have taken all steps to warn against or outright ban the use of DJI’s drones. Meanwhile, a recent investigative report claims DJI worked directly with the communist regime on questionable projects.

“Think about this for a second,” Sen. Rick Scott (R-Fla.) wrote on Twitter. “This virus originated in Communist China and the Chinese Communist Party’s lies helped it spread around the world. Now we’re using drones made by a Chinese company and backed by the CCP to enforce social distancing. This is crazy!”

The senator was one of several who voiced concerns last year when they learned that the Federal Aviation Administration (FAA) may have partnered with DJI for a pilot project. The FAA responded to the lawmakers’ inquiry on April 22, writing in a letter that it “acknowledges the gravity of the potential issues raised.”

The FAA said it partners with state and local governments for the pilot project and not with any individual companies.

One of Scott’s constituents, Sgt. Tim Ehrenkaufer with the Daytona Beach Police Department in Florida, was identified by DJI as a recipient of a pair of drones. Ehrenkaufer didn’t respond to a request for comment.

The deputy chief of police in Elizabeth, New Jersey, told The Epoch Times that the department is still using a pair of Mavic 2 drones loaned by DJI.

“The Police Department is aware of alleged data breaches and appropriate precautions are in place,” Giacomo Sacca, the deputy chief, said in a statement to The Epoch Times.

Such widespread adoption is alarming, considering that DJI’s consumer devices send flight logs, video, and audio to its servers by default. A person using them has to navigate a series of options to turn off the data collection.

The U.S. Army appears to have used the devices at least until August 2017, when the drones were banned “due to increased awareness of cyber vulnerabilities associated with DJI products,” according to a notice obtained by sUAS News. At the time, DJI drones were the most widely used off-the-shelf unmanned aerial device in the Army, the notice stated.

The Homeland Security Investigations office in Los Angeles went a step further in an unclassified bulletin issued last year, stating “with high confidence” that “critical infrastructure and law enforcement entities using DJI systems are collecting sensitive intelligence that the Chinese government could use to conduct physical or cyber attacks against the United States and its population.”

The Department of Homeland Security released a similar notice in May 2019, warning that U.S. officials have “strong concerns about any technology product that takes American data into the territory of an authoritarian state that permits its intelligence services to have unfettered access to that data or otherwise abuses that access,” Reuters reported.

The Department of Interior (DOI) formally grounded its drone fleet early this year except for emergency missions. The department’s notice didn’t single out Chinese-made drones, although a spokesman told The Wall Street Journal three months earlier that the grounding was in response to national security concerns around Chinese-made drones. Prior to the grounding, the DOI had cleared DJI’s “government edition” drones in 2019 after an extensive study.

An official familiar with the grounding of the DOI fleet told The Epoch Times that Interior Secretary David Bernhardt grounded the fleet after receiving “classified briefings on security concerns related to our drone fleet.”

“Currently, we are working hand-in-hand with experts in the executive branch to coordinate a thorough assessment of certain DOI drones and scanning for any potential national security threats,” the official said.

In addition to the concerns voiced by federal agencies, DJI’s servers were successfully accessed by cybersecurity bounty hunters in late 2017. One hunter documented accessing DJI data collected from the U.S. military, copies of passports and driver’s licenses, and other sensitive information.

These and other national security concerns may eventually lead to broader bans on DJI drones. Sen. Scott backs a broad ban on DJI devices across federal and state governments. Rep. Louie Gohmert (R-Texas) told The Epoch Times that lawmakers on the House Judiciary Committee “definitely need to determine whether Americans’ privacy rights are not being compromised by use of Chinese drones.”

After reportedly starting DJI from his dorm room, the company’s founder, Frank Wang, led the firm to global dominance of the consumer drone market. DJI now holds 70 percent of the market, according to a company estimate.

Large companies in China can’t exist independently of the CCP, which has legal, or virtually unconstrained access, to any company resource. DJI’s privacy policy around this point is particularly broad, stating that the company can share user data “to comply with applicable laws.”

“In the year 2020, to think anything other than DJI is sharing unfettered, all-spectrum information and data flow worldwide with the MSS [Chinese intelligence agency] is just unwise,” John Mills, the former director of cybersecurity policy, strategy, and international integration at the Department of Defense, told The Epoch Times.

DJI didn’t respond to a request by The Epoch Times for comment. The company previously said the claims that it “routinely” shares data with authorities in China are “false.” That statement notably avoided addressing whether DJI has shared data with Chinese authorities on a non-routine basis.

DJI’s capabilities around the detection and tracing of drones are startling. The company currently markets a system called AeroScope, which “is able to identify the vast majority of popular drones on the market today by monitoring and analyzing their electronic signals to gain critical information.”

According to Bloomberg, Wang had created a system similar to AeroScope for the communist regime in China. The system reportedly allows authorities to trace any drone to its owner’s cellphone. DJI didn’t respond to a request for comment on that report.

The company also publicly stated in a since-removed press release in 2017 that it’s cooperating with the public security bureau of Xinjiang, which is known for persecuting Uyghur Muslims and Falun Gong practitioners.