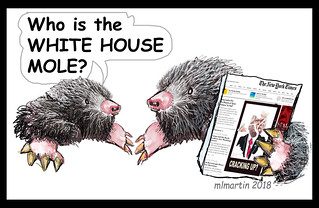 Are the “Whistleblower” and the West Wing Spy the SAME PERSON?

When Paul Sperry put a name to the “whistleblower” last week, it was already quite well known in Washington circles who that person was, and a lot was known about his connections to the DNC, John Brennan, Joe Biden and the top tier of FBI officials who had targeted Trump and his campaign. Nevertheless, one of the attorneys for this person, Mark Zaid of Whistleblower Aid, put out a statement saying that the release of Eric Ciaramella’s name “is at the pinnacle of irresponsibility and is intentionally reckless.” That’s right, he was speaking about the irresponsibility and recklessness of suggesting that the so-called “whistleblower” is Eric Ciaramella…that’s Eric Ciaramella…C-I-A-R-A-M-E-L-L-A.

The name is an open secret all around Washington, DC, yet many in the media are pretending they don’t know. In stark contrast, Dan Bongino may have taken this new revelation even further, having possibly connected another dot, tying this individual to the effort to spy on newly-elected President Trump in the White House. Bongino picked up on something unusual in the Sperry piece — something I didn’t when I linked to it last week.

Sperry had taken the trouble in his piece to provide a phonetic pronunciation of “Ciaramella.” It’s not what many would assume, which is “see-ah-rah-MEL-ah.” Sperry gave it as “char-a-MEL-ah.” Why should this matter? Not to go all tin-foil hat on you, but Sperry may have been trying to clue us in on something.

Recall the text messages between Peter Strzok and Lisa Page that talked about sending someone named “Charlie” to the White House. They also use the term “CI,” which may stand for “Confidential Informant,” or SPY. If “CHAR-lie” was “Ciaramella (CHAR-a-mel-ah),” then the so-called “whistleblower” was actually a mole, planted inside the White House to spy on the President. We know that Ciaramella had been assigned to work in the West Wing.

As investigative reporter Sharyl Attkisson has noted, the timing of the “whistleblower” report suggests that he was worried that Trump was getting close to uncovering Democrat links to Ukrainian efforts to interfere with our election in 2016.

On April 25, Sens. Chuck Grassley and Ron Johnson sent a letter to Attorney General William Barr asking about these text messages. You can be sure he’s on the case.

I had planned to link to Dan Bongino’s podcast about “Charlie,” but the following article beat me to the punch and also lays out more information (much of which we’ve covered but is good to review), so I linked to that instead.

On Sunday, Mark Zaid went on CBS’s FACE THE NATION to say that his “anonymous” client would be willing to answer written questions. THE DAILY BEAST tweeted that had offered the GOP “a direct opportunity to ask written questions of the whistleblower” without compromising his or her identity. (Never mind that his identity has already been compromised.) But according to the “rules” (ha) being followed in Adam Schiff’s House Intelligence Committee, he has the option to allow Republicans’ questions but can stop witnesses from answering questions he doesn’t want asked, which he has done. Also, House Minority Leader Kevin McCarthy said on the same show that he was not aware of the offer to ranking member Devin Nunes to have the “whistleblower” answer Republicans’ questions. “I have never received that offer, and I am the lead Republican,” he said.

According to FOX News, Zaid tweeted that his client would answer questions posed directly by Republican members “in writing, under oath & under penalty of perjury.” He continued, “We will ensure timly answers. We stand ready to cooperate and ensure facts – rather than partisanship…”

Let’s just say I would be very surprised if this person answered all the questions Republicans might want to ask, whether in person or submitted in writing, as they would definitely choose to ask all about his relationship with Strzok, Page and others, who might in much bigger trouble than they already are. If the FBI/CIA spied on the White House, which seems increasingly likely, and the “whistleblower” who sparked the impeachment “inquiry” turned out to be THE SPY, this might be the most incredible government scandal ever, certainly in my lifetime.

Both of the “whistleblower’s” attorneys, from the law firm “Whistleblower Aid,” are strongly objecting to efforts being made to uncover their client’s identity. Well, they certainly have good reasons for trying to keep it a secret, and these have less to do with protecting their own client than they do with furthering the Democrats’ false narrative and keeping a larger plot from being exposed. Here’s a more comprehensive update on the whole “whistleblower” story from FOX News…

And, in an update on that story, late Sunday House Oversight Committee ranking member Jim Jordan issued a statement: “Written answers will not provide a sufficient opportunity to probe all the relevant facts and cross-examine the so-called whistleblower. You don’t get to ignite an impeachment effort and never account for your actions and role in orchestrating it. We have serious questions about this person’s political bias and partisan motivations and it seems Mark Zaid and Adam Schiff are attempting to hide these facts from public scrutiny. Last week’s testimony raised even more concerns about the anonymous whistleblower and our need to hear from them, in person.”

I would add that we might also want to find out if he answers to the name of “Charlie.”

Also, President Trump is insisting that the whistleblower give up his anonymity, as he has made false claims.

Finally, if you would like just a taste of Zaid’s condescending attitude towards President Trump — and also to his supporters — here it is:

That’s right — in his mind, he’s “non-partisan,” and if we out “in the heartland” don’t understand this, we are just “narrow-minded.” Perhaps he’s not totally anti-Republican, but he’s as anti-Trump as they come, and against any Republican who doesn’t share his dislike for Trump. He put out a tweet saying, “Help us legally challenge this President. We’ve been litigating claims against him for 2 years FOR FREE…” This attorney even pitched to Michael Avenatti. I think that speaks for itself.